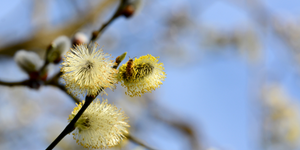 Did you know that according to NHS data, over 20% of UK residents suffer from hay fever symptoms every year?

That’s a whole lot of hankies.

Many people turn to antihistamines to help. For some, that is enough but for others, the bothersome symptoms still breakthrough when the pollen count is high. Luckily there are natural remedies that can help and the quicker you start, the better the chance that you can significantly reduce your symptoms this year.

Not all pollen is the same, however. If your symptoms are already starting, tree pollen is your problem, if it’s later in the summer then it’s likely grass pollen, and later summer it will be from weeds. Knowing which time is most challenging for you can help you to stock up on herbs and change your diet in time.

Herbs that can help manage hay fever symptoms include nettle. It contains a compound that acts as an antihistamine. This wayside weed is very good at reducing the symptoms of hayfever and can simply be taken as a tea either on its own or with chamomile. The two work together really well. Chamomile has a marked ability to reduce redness and itchiness and give general relief to hayfever symptoms. If hayfever keeps you from sleep, chamomile also contains apigenin that binds to receptors in your brain helping you to relax and initiating the sleep cycle. Taking the cooled tea bags and sitting with them on your eyes can really help to relieve discomfort.

Some people find that taking other allergens out of their daily routine can help reduce the severity of symptoms. If you know that you don’t get on very well with cow dairy or wheat, this is the perfect time to cut them out to stop your system becoming overloaded.  Some of my patients also swear by Pycnogenol, a maritime pine extract that can help reduce symptoms and make summertime bearable again. Simple steps like putting a barrier cream around your nose to trap the pollen particles, keeping windows and doors, and not drying washing outside, can all help to reduce the amount of pollen that you breath in. Every little helps.

If you’re only just realising there’s more to controlling hay fever than antihistamines, follow the tips above. But here’s a special tip from me – next year, start working on it in January to have a more comfortable year 😉